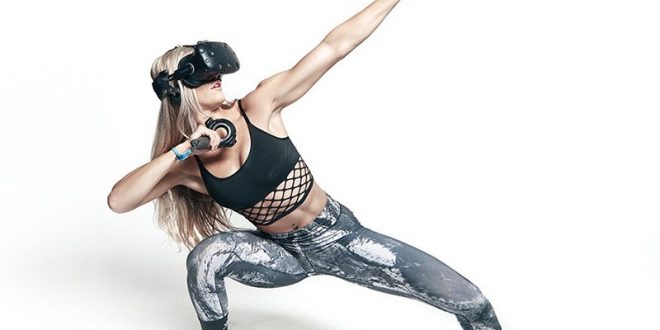 Can virtual reality really get you fit?

Our writer dons a headset and turns boxer, air guitarist and saber wielder in a bid to shake off his lockdown lassitude

Like many people, by May I was having a difficult time in lockdown: struggling with homeschooling; stressing about work; tired out by Zoom calls; comfort eating; drinking too much; and feeling nervous about venturing out for short walks, let alone exercise.

And then I strapped a computer to my face and gave thin air a damn good pummelling and everything improved a little. Virtual reality’s role in helping me to clamber out of the lockdown blues has changed the way I think about the technology and its potential to play a meaningful role in day-to-day life.

I’ve written a fair bit about virtual reality (VR) as a medium in the past, testing headsets and apps and interviewing their creators with curiosity and an open mind. Yet my professional interest never ignited the desire to spend my own time using technology that – by necessity in its current iteration – isolates you from the people around you. (Cue the obligatory joke: that’s what smartphones are for, right?)

The shift started in May, with an impulse purchase of an Oculus Quest headset and a fitness app called BoxVR. It’s essentially Guitar Hero meets boxercise: you jab, hook and uppercut glowing orbs and duck or dodge barriers, all of which fly at you in sync with a soundtrack ranging from rock, pop and dance to drum’n’bass.

I’m not a boxer. Less “float like a butterfly, sting like a bee” and more “pant like a water buffalo, flap like a tired kitten” in truth. But over six weeks, BoxVR became a daily habit and, as good exercise should, provided the spark to go walking, eat healthily and leave the giant crate of cider untouched most nights (also a lockdown impulse purchase).

Other people clearly see something in BoxVR too: in July, the London tech startup behind it, FitXR, announced a funding round of £6m from a group of venture capital investors plus the government’s Innovate UK agency.

The company’s co-founders, Sam Cole and Sameer Baroova, met at business school before founding FitXR in 2016, drawing on Cole’s background in finance and Baroova’s career as a games developer.

“We don’t see ourselves as a gaming studio, but as a fitness company,” says Cole, adding that FitXR was set up in the belief that “the next computing platform after the smartphone was going to be some kind of mixed reality headset” and that “fitness everywhere would be completely transformed”.

Video companies love this kind of talk, but in recent years, the outlook for VR technology has looked distinctly mixed. In 2016, a research firm, IHS Markit, predicted that by 2020 there would be 81m VR headsets in use globally.

And now? In May this year, research firm Omdia, which acquired IHS Markit’s tech division in 2019, estimated that the current base is about 26m units. Sales have been disappointing, certainly compared with the bullish expectations when the Oculus Rift headset kicked off the modern VR hardware generation. Facebook bought its maker for $2bn in 2014 two years after a kickstarter funding campaign and the headset went on commercial sale in 2016.

Sluggish sales tipped VR sharply into what the famous “Hype Cycle” theory from Gartner, a firm of analysts, describes as the “trough of disillusionment”, although 2019 and 2020 have seen it progress to the next stage of that cycle: the “slope of enlightenment” – with fitness one of the app genres doing the lifting.Advertisement

Facebook’s Oculus Quest, released in May 2019, was hailed as a big step forward. It was a standalone headset – you didn’t have to connect it to a computer or console – and it was priced at a relatively affordable £400 to £500. In its first year, Quest owners bought £80m worth of games and apps from its official store.

“The Oculus Quest really reflected an inflection point in the industry, where suddenly the technology was far more accessible and intuitive than it had ever been before,” says Cole. “I could send a headset back to my mum in New Zealand and she could take it out of the box and operate it.”

The Quest, together with Sony’s PlayStation VR and digital game store Steam (which supplies games for other VR headsets) have created an increasingly healthy market for developers and startups to target. Games remain the dominant category, but fitness has emerged as another key genre.

Punchy alternatives to BoxVR include Creed: Rise to Glory and The Thrill of the Fight, which offer animated opponents to fight. In the US, veteran VR producer Within Unlimited has launched a workout app called Supernatural, using a gym-style subscription ($19 a month or $179 a year).

There’s also a burgeoning category of games with fitness as a secondary feature, many of which go down the “Guitar Hero but with punching and hand-wiggling” music-rhythm route.

Synth Riders, Audioshield, Audio Trip and Beat Saber (see below) are just four examples of VR games that will see you work up a sweat. The latter sold a million copies in its first nine months, its developer was acquired by Facebook in November 2019, and it has since passed the 2m sales milestone, while licensing music from big artists such as Green Day, Imagine Dragons and Timbaland.

There is also an emerging community around VR fitness, from YouTubers posting their BoxVR and Beat Saber workouts, to a website called the Virtual Reality Institute of Health and Exercise.

It rates VR apps and games based on their calorie burn per minute, comparing them to real exercises such as tennis, rowing and cycling.

According to its ratings, BoxVR burns a tennis-like six to eight calories a minute for the average user, although its top rating goes to a version of Audioshield that is equivalent to a bike ride, burning 10 to 13 calories a minute.Advertisement

Calorie burn seems to be the prime metric for VR fitness in 2020, which I’m a little wary of, having jumped on the step-counting, food-logging, exercise-tracking app bandwagon in past attempts to get fit, which all saw me slip off it within a few months.

For me, the appeal of VR fitness is that it’s fun, yes, but also that I can lose myself in a workout in a way I struggle to in other contexts. The physical isolation of wearing a headset, it turns out, suits me well.

“That’s really the power of it,” says Cole. “You can enter that flow-like state. Some people get that when they’re running: they can really get lost in a run with a great Spotify playlist on and forget that they’ve been out there for half an hour pounding the pavement. For other people, that’s an impossible task.”

His words are mirrored by those of another VR fitness co-founder, Bojana Knezevic of Holodia, which makes technology for VR workouts on rowing machines, exercise bikes and elliptical machines at home or in the gym.

“The combination of the full immersion, helping people forget they are working out, and the gamification and competition, motivating them to push harder, is why VR fitness appeals more and more to the general population,” she says.

Knezevic identifies the evolution of VR hardware as a key reason for the growth of fitness apps and games, but thinks further developments will come from creativity – looking beyond traditional real-world workouts.

“VR fitness innovation is driven, on one side, by VR hardware developments. You have headsets that are super comfortable, don’t make you sweat and have no fogging issues, as was the case in the past. And they are affordable,” she says.

“On the other hand, the freedom that VR content development gives means you don’t have to limit yourself to traditional sports: you can make your body move and work out in any way you want. This is where creativity, fantasy combined with sports science, comes in and drives further innovation.”

The next wave of VR fitness invention may well be social, too. Holodia and Supernatural have companion apps that compare your scores with friends, while BoxVR has global rankings for each of its workouts and a multiplayer mode. My proudest lockdown moment so far has been breaking into the top 50 of its “Unspoken” metal-soundtracked class.Advertisement

Cole says FitXR has big plans on this front. “You will use the product and feel closer to exercising in a group setting,” he says. “BoxVR and other applications are really just scratching the surface. I think social and multiplayer applications are going to be a really important part of how VR scales up.”

As for actual gyms, they may play a role too, as they open again after lockdown. Knezevic says that in Asia and the Middle East there is already “a new boutique concept of VR gyms” with headsets in their studios plus programmes of virtual workouts, classes and coaching for members at home.

“They are adjusting their business models, monetising VR fitness and making sure they are relevant in the future,” she says. Cole, meanwhile, notes that gyms will always have more equipment on site than the average exerciser could afford to have at home.

However, he envisages a future where people might take a mixed-reality headset – one that lets them see their surrounding environment – to the gym and use it to show them how to use particular weights or machines.

As I write this, the gym that I belong to is about to reopen and, despite my new VR boxing habit, I can’t wait to get back there, a mark of how well it has created a real-world community among its members.

VR isn’t a gym-killer just yet, but it can be an alternative for some people and a complement for others. For this buffalo-panting (but rapidly less kitten-flappy) amateur pugilist, this increase in choice feels like a healthy thing.

10 of the best VR fitness apps

Boxercise in the virtual world to a soundtrack from emerging artists, taking in rock, pop and dance, but also metal and drum’n’bass.

The music game Facebook “liked so much it bought the company”. You swish a pair of virtual sticks to break boxes in time to music.

Already a popular console game, Dance Central works just as well as a VR title, with 32 tracks to learn the steps to and work up a sweat.

There are more than 200 tai chi workouts to try in this game, which is a good way to prepare for doing tai chi in the real world without falling on your face.

The Thrill of the Fight

If BoxVR’s glowing orbs aren’t your thing, try this game’s fleshier boxers. The fights may be virtual, but the sweat you work up is very real.

This music game is all about the arm waving, as you try to follow lines (or “rails”) of coloured spheres. Joyful, even if you look ridiculous to onlookers.

Another “hit glowing objects flying at your face” VR music game, but with a killer soundtrack: Lady Gaga, Deadmau5 and Skrillex are all included.

US-only for now, but one of the most serious attempts yet to marry music and fitness, with new workouts daily and a mass of stats charting your progress.

The TV show Hole in the Wall saw Lycra-clad contestants contorting to fit through people-shaped holes in an onrushing wall. This is that, but in VR. Lycra optional.

Still in “early access” on digital games store Steam to get feedback from players, PowerBeatsVR has lots of promise with its punching, dodging and squatting.

Previous Office Relocation Service
Next NHS Covid-19 app: How to install and use it

NHS Covid-19 app: How to install and use it